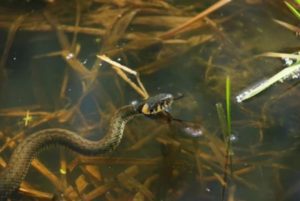 The sight of a snake brings so many questions to a person who is afraid of it. For example, if you are a fisherman or you like to swim a lot, you might have wondered if snakes can bite underwater. This is certainly a logical question that one can wonder about.

Usually, all snakes are not venomous and if they even bite, the type of bite such as a dry bite or venomous bite further tells about the chances of survival. However, for swimmers and divers, it is important to know fuller insight about reptiles, snakes, and any creature that is within the water or even around it.

This is the only way for you to get safe and sound swimming time besides; the unexpected snake bite would never give you the chance to think about what to do. So let’s find out if a snake bites in while you are in the water or if it’s just a myth.

The short and perhaps pretty frightening answer to this question is, yes they can. However, the likelihood of snakes biting underwater is not something that is frequent. A snake can bite you while being underwater only if it is frightened or feels unsafe due to some reason. To save itself from the possible harm, the snake can attack you for sure.

Most fishermen are at the risk of getting bitten by the snake. It doesn’t really matter if the snake is venomous or not, but if you are underwater and there are snakes too, chances are you will get bitten. Therefore, if you see a snake underwater, the best and most sensible decision would be to run away!

Are all snakes are dangerous underwater

Now, this is the question that you should be concerned about. if you are diving underwater or maybe swimming on a shallow water surface, chances are there are snakes. However, what you need to know is that there are two common snake species found in water: the cottonmouth (water moccasin) and the water snake.

Snakes bite due to their nature. However, when it comes to being underwater, you need to be extra careful not to fight them back and only run as far as you can. In this article we took an analysis of the dangerous snakes found underwater and how you should treat yourself if you get accidentally bitten. We hope you never come in contact with the venomous snake and stay safe.