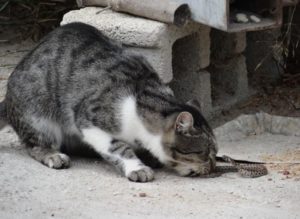 Cats are curious by nature. It is unfortunate for snakes that their slithering movements pique the curiosity of a cat, triggering its hunting instincts. Does that mean cats can keep snakes away? Yes, they do. It’s a known fact that cats and snakes don’t like each other because they’re competitors – both hunt mice, rats and birds.

However, it’s not as simple as that. Having a feline around may not always discourage snakes, especially if you’ve got rodents and amphibians running around the house. Besides, not all cats prefer to stay outdoors to hunt snakes. In that case, cats alone don’t offer foolproof protection against the creepy serpents.

In this article, we will discuss how good cats are at chasing snakes away. Also, what do you need to do if a snake injures your pet?

Are Snakes Afraid of Cats?

Strange as it may be, a creature as frightening as a snake is scared of these cute meow-ing animals. Visual evidence shows that snakes prefer to stay away from the house where a cat is. It is because snakes provoke the curious nature of cats.

The fast movement of a snake activates the assassin in a cat. Most of the time, it will hunt and kill the snake. When a cat stalks a snake, it might get defensive and hiss at the pet to warn it. It does little to scare the cat. As a matter of fact, it takes out its jaws and sharp claws to pounce on the snake. It grabs the snake’s head in its mouth and tears up its skin with its claws, leaving it paralysed or dead.

Most of the non-venomous snakes – such as garter, rat snakes and gopher snakes – that appear on your territory prove to be easy prey for cats. Their intimidating sizes do little to protect them from these felines. On the other hand, a cat’s sharp claws and fast striking ability make the regular and non-poisonous snakes fear it. They are likely to maintain distance from such residents where cats are patrolling.

How Do Pet Cats Can Help You Get Rid of Snakes

As most of you know, cats are a popular choice for getting rid of snakes. They can do that in several ways.

Cats and snakes both prefer the same diet, rodents and even birds. Thus, food puts them in competition. So, if you want to get rid of snakes, bring in a cat. It will hunt down rats and mice. No rodents mean snakes will look elsewhere for food.

Gross! Well, snakes also find it gross and repulsive. A cat’s pee has an unpleasant stench that keeps snakes, rodents and bugs at bay. However, people living in that house will also find it hard to breathe the same stinky air.

Cats may not be fond of eating snakes, but they do love to hunt them. They are sadists in the sense that they play around with the prey before killing it. Haven’t you seen the “Tom & Jerry” show? Here, a snake trying to slither away becomes the jerry for the cat.

It provokes the cat to chase it and eventually kill it. It might even nibble and chew a few parts of the prey if hungry.

It’s a well-known fact that domestic cats have a higher kill rate when compared to other members of the cat family.

Snakes fear cats, especially if they’re bigger than them in size. That doesn’t mean a snake cannot subdue a cat. The venomous snakes especially can prove fatal for the felines.

Moreover, an anaconda, a member of the boa family, can gobble down an entire lamb without batting an eyelash. So, what chance does a little cat have against it? Little to none.

Sometimes, snakes also get lucky and get the upper hand in a cat-snake fight. If a snake feels cornered, it will strike. That may result in leaving a nasty fang wound on the cat.

If the bite is from a venomous snake, it will prove fatal much more quickly for the cat than it would for a human.

What to Do If Your Cat Gets Bitten by a Snake

According to ASPCA, snake bites should be taken as a medical emergency by cat owners. They should immediately seek veterinary treatment for their pet.

The Royal Society for the Prevention of Cruelty to Animals has highlighted a few symptoms that a cat might exhibit when bitten by a serpent. These are:

After confirming that your cat is being bitten by a snake, transport it to a vet instead of wasting time in home remedies.

Make sure you carry the animal to the medical facility. Letting it walk will risk the spread of venom.

If possible, describe the culprit snake to the veterinarian. It helps them in the treatment.

If your regular veterinarian isn’t equipped to handle the case or is closed, contact ASPCA Poison Control Hotline for help.

How to Deter Snakes to Keep Your Pets Safe

We’ve stated earlier, both cats and snakes share a mutual love for rodents. Snakes visit the residents where they spot rodents’ activity. Therefore, to avoid putting your cat in a deadly encounter with a snake, ensure your neighbourhood is mouse-free. In fact, free of all the things that snakes can snack on. One way of doing that is to set mouse traps around your yard and house.

Speaking of traps, using snake traps is also a good way of getting rid of unwelcomed snakes.

Keep your house clean and make regular use of pest control.

Lastly, eliminate all the vulnerable points from your house that allow rodents and snakes entry to your property.

Other Pets that Keep Snakes Away

There’s a list of animals that can deter snakes. Guinea hens, pigs, turkeys, big roosters are some of the pets that are good at keeping snakes away. Besides, fox urine acts as an effective snake repellent.

Animals such as mongoose, raccoons, honey badgers and Scottish terriers are common snake predators. Birds like owls, hawks and falcons are also effective at scaring snakes off.

Cats and snakes aren’t the best of friends, despite sharing a mutual appetite for rodents. In fact, cats like to hunt snakes as much as they like chasing and killing mice. That’s why they’re considered a reliable option to keep snakes away. However, you’ve to be ready for the opposite outcome when pitting your house cat against a trespassing snake. There is always a risk of injury or death of your beloved animal. Therefore, you must have all the necessary arrangements in place to not just keep snakes away but also protect the felines.