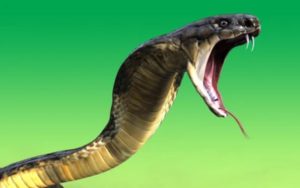 Usually, man thinks wildlife and nature are not friendly towards humankind. This is true to some extent especially when you talk about snakes and their approach toward you. That is the reason why there are thousands of studies conducted to find out ways that tell us more and more about wildlife, and also educate us on how we can stay safe.

But if you are planning to go on a trail, you should research about snake chasing people or it is just another myth in the market. Although there is a shortage of myths related to snakes, there are certain things that instantly attract attention when it comes to survival.

No matter if the snake is venomous or not, if it’s chasing you like crazy, it really can scare anyone. And if you already know it’s the most dangerous snake to have your back; well, I don’t need to explain any further, do I?

It may sound overrated, but a snake would bite you or harm you because of fear. Like we have fear of snakes, snakes also fear us. So, if they bite you it is possibly because they feel insecure or are frightened. But is snake chasing people still a valid question?

So the answer is, “snakes do not chase people”. Besides, there is no valid evidence since that evaluates the very point. Snakes do not willingly hurt or bite humans unless you create hindrance in their way while they are hunting or doing whatever. Once you interrupt their routine, it can be dangerous for sure. And if a snake bites you it is clear that the snake was either frightened or as a result of self-defense. The good news is snakes do not regard humans as their “diet”, preferably, so they do not chase people.

However, accidents are never predicted and a snake may chase for maybe not too long sometimes. This is not their behavior but as you know a snake is already a fatal enemy of humans so chances are it will cause harm in any possible way.

While it is not natural to chase people on purpose or out of fun, it is not a rule. You might see a snake chasing a human. Since there are a plethora of kinds of snakes out there, some snakes can chase humans. For example, the Central American bushmaster is pretty popular in the chasing game

As a matter of fact, snakes do not chase people of their will. In fact, if you pay heed, none of the animals, reptiles, or anything purposely you harm unless you provoke them in the first place. However, mosquitos are exceptions. So, in most of the memories, you have the privilege that a snake won’t chase you. But that does not mean all snakes are equal in behavior and you should always try to be at a reasonable distance because there are cases where snakes have chased humans for not too long and the consequence was death!