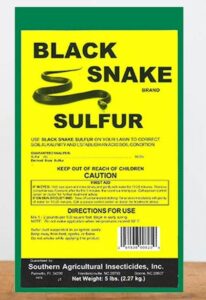 It is a decades-old belief that sulfur keeps snakes away. You will come across many such self-concocted snake repellents convincing that they can rid you of snakes for good. But, the truth is not as promising as what the stories make you believe.

Like many out there, I also used sulfur to ward snakes off without investigating does sulfur keep snakes away or I am in for a disappointment. Below is the outcome of my personal testing and research to ensure you don’t put all your eggs in one basket, the wrong basket in this case.

The answer is a straightforward NO. Despite the dozens of convincing stories on the internet, sulfur doesn’t repel snakes. It simply cannot because it doesn’t have the required properties. Scientifically speaking, pure sulfur neither has any odour nor taste. That right there nullifies all the mantras regarding sulfur successfully driving snakes away.

Snakes react to strong and overwhelming odours, and pure sulfur lacks that.

I being my typical curious self tested this theory at home. Imagine the disappointed look on my face when the annoying serpents slithered right across the powdered sulfur barrier as if it was a modelling ramp.

Scientists and researchers from Pennsylvania and Nebraska Universities busted this myth decades ago. Their experiments and research plainly state that sulphur doesn’t have any deterring effect on snakes, both venomous and non-venomous.

Hence, purchasing bags of snake repellents containing sulfur is just a waste of your hard-earned bucks.

On the other hand, sulphuric acid — sulfur gas mixed with water — is a strong acid and kill snakes. Ouch…that’s harsh. Pouring it around your yard seems impractical as it can kill your plants too.

Why is Sulfur Still Regarded as an Effective Snake Repellent?

Now that’s a million-dollar question. The thought baffled me; I’m sure many of you must be confused too. Many famous snake repellent manufacturers mix sulfur with more potent deterrents or use sulfur compounds to produce a bothersome odour.

For instance, a very famous combination is that of sulfur with naphthalene. This combo is well-known for emitting a sharp stink that annoys snakes.

Similarly, the rotten egg smell, another odour known to repel snakes, is due to the presence of hydrogen sulphide.

If you read the labels of commercial snake repellents, you will notice that sulfur is only one of the many components in the product. They use a specific concentration of each element to make the concoction work on snakes.

Furthermore, pest control companies also don’t use sulfur in its purest form to get rid of these slithering critters.

Although sulfur has low toxicity, it is still not 100% for humans and pets. Cautious is needed while using certain sulfur products. Taking in an excessive amount of sulfur may cause diarrhoea or a burning feeling.

Powdered sulfur can irritate your airway passage and result in a coughing fit. Even worse is that it can leave a burning sensation in your nose and eyes and cause an itch on your skin. Therefore, always wear a mask and gloves when dealing with this stuff.

Sulfur is the most dangerous only when you burn it because it produces a toxic gas called sulfur dioxide. Inhaling its fumes can have severe repercussions for both humans and pets.

However, a single and brief exposure to sulfur doesn’t have any severe effects on humans and their beloved pets.

A Million Dollar Advice: The best and 100% effective way to avoid unwanted snake interactions is to keep your indoors and outdoors uber-tidy and neat. Also, keep your grass short, 1-inch or shorter than it.

Lastly, don’t allow pest and rodent infestations on your premises. They are the biggest cause of snake invasion.

The use of sulfur as a means to keep snakes away seems like a good idea, but the truth is that it doesn’t give you the wanted outcome. Experimental evidence shows that it doesn’t make snakes move even an inch from their place, let alone compel them to flee the treated areas and never return. Commercial repellent products combine other potent elements with sulfur to emit an unpleasant scent to ward off the serpents. However, they’re not 100% eco-friendly – many are hazardous to humans, animals and plants. The only thing that never fails to deliver results is to keep your property neat and clean, eliminating everything that holds even the slightest attraction for snakes.