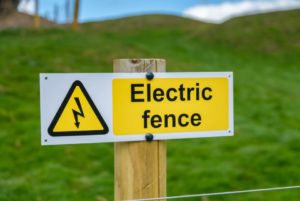 There are multiple options on the market available today when it comes to electric fencing.

The best thing about electric fencing is that installation is quick and easy and can easily be performed in less than a day, usually, it depends on the size of the area you wish to cover.

In simple words, electric fencing is a humane deterrent for numerous common pests, like snakes.

Whenever a snake tries to penetrate an electric fence, it receives a small shock that will force it away from the fence. Plus, with the combination of commercial snake repellents and electric fencing, you can easily repel snakes from your home and yard.

What exactly is an electric snake fence?

Electric fence systems are commonly used to control a wide variety of animals such as snakes and some other pests. A normal electric fence works as a psychological barrier that keeps farm animals in and wild animals like snakes out, even over long distances.

So an electric snake fence will secure your area from snakes as whenever the snake will try to sneak into your yard, the moment it touches the electric fence and become get wanted and trained not to go near the fence.

How does it work?

Once an electric snake fence is installed correctly, any animal comes near an electrically charged fence wire and makes contact with it, it will give them a shock as the electric current will pass through the animal to the ground, completing the electrical circuit.

It is important that a fence must be well-designed and well-constructed in order to absorb some pressure from animals, wind, and snow. The fence’s charger must have enough power for the length of the fence as well as for the animals being controlled.

So as the earth itself makes up half of the electric fence circuit, it is very important that a ground circuit is properly installed. In such areas where poor soil grounding conditions exist, a two-wire system should be used with one wire electrically charged while the other wire acts as earth ground. Usually, the two-wire electric fence system is used when there are alternating hot and ground wires are installed.

Moreover, electrically charged fence wire must not come into contact with tall grass, shrubs, nails, fence posts, or any other conductive objects. If it happens, the electric charge from the fence wire will not work properly.

An electric fence is definitely an effective way to repulse snakes. There are several benefits of electric fencing, and the most prominent benefit is that it costs less than traditional non-electric fences.

Many people are not aware of the fact that electric fencing is actually an economical option as it is half the cost and even takes less than half the time to build and maintain.

Furthermore, electric snake fencing is quite safe and reliable. Due to safe, short, and memorable shock in order to create a psychological as well as a physical barrier.

Snakes remember and develop respect for the fence, which also ensures less animal hide and pelt damage. As compared to other traditional fencing options, this one is considered more durable and long-lasting.  As animals avoid touching the fence after the first few shocks, it lasts a lot longer than.

How to build an Electric fence?

Start with making a rough sketch on paper of the area to be contained within your electric fence. Measure the specific working area and don’t worry too much about the measurements just have a general idea of how much fencing you would require. Calculate the spacing and number of wires you are planning to run. Considering a garden-style electric fence, a single brace at the corners with a three-wire system would be perfect.

Always go for an electric fence that fulfills your requirements. As a matter of fact, there are multiple options available when it comes to electric fencing, from rope and tape fences to high tensile woven wire, as well as electric netting. Different fences carry stronger electric currents and are specifically designed to cover varying amounts of terrain. For a typical garden, electric fencing is the best option to prevent snakes from entering.

Now you must focus on Installing your posts. you can start with sinking the corner and end posts and then drive them straight into the ground, or alternately, you can also dig holes for the posts and fill in them with concrete. Regardless of what method you prefer, make sure that each hole should be 48 inches deep for maximum stability. Also, add the insulators to your posts.

Now run the bottom wire around the base of the posts, and tighten it well. Then try to place the first wire close enough to the ground in order to stop snakes at least within 3 inches of the ground. Most importantly, make sure that the wire does not touch the ground as the resulting spark can blow out the circuit and cut the electricity. Attach this first wire to the electric fence box and plugin in order to close your circuit.

Repeat the same with two additional wires to build a full fence. Now close your circuit and your fence is now active. It is important to know that when working with electricity or electric fencing, never ignore safety and manufacturer guidelines. You can also add snake repellent to your fence boundary to reinforce the barrier against snakes.