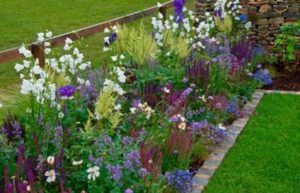 It’s such a delightful sight to see one’s garden bloom. Little did we know that our favourite plants could also serve as resorts for snakes. These creepy monsters have a habit of hiding in ground cover and showing themselves when you least expect it.

Don’t worry. If snakes can be sly, so can we. The best way to one-up on them is to cultivate the ground cover that repels snakes. I bet that never crossed your mind. Today, we are going to offer you a list of plants that are notorious for scaring serpents off. They will offer you the perfect ground cover to shield your outdoor space from snake attack and beautify it simultaneously.

There’s no need to leave your outdoors barren and ugly due to fear of snakes. Following plants will let you kill two birds with one stone: adorn your landscape and at the same time serve as a snake repellent barrier.

Growing Marigolds is the cure for snake trouble worldwide. This plant belongs to the sunflower family and has sturdy roots that emit an unpleasant smell. That odour irks serpents, moles, gophers and many other pests, forcing them to flee.

Alongside that, its tangerine/yellow flowers enhance the appearance of your garden/lawn. However, you should look out for the mice as they like to take refuge in them.

Many gardeners will also recommend the Lemongrass plant for tackling the snake issue. The plant falls under the category of snake repellent plants because of its citrus odour. Snakes just cannot stand that stench.

Furthermore, the plant is also drought-resistant and low-maintenance. Therefore, it is a reliable option for homeowners residing in hot climates.

Being on the receiving end of one’s mother-in-law’s tongue’s lashing is terrifying. Can you see the parallelism here? This plant has pointy leaves in a striking colour that scare the bejesus out of slithering reptiles. They dare not come near that area where this plant is blooming.

Another advantage is that the plant rejuvenates the atmosphere. It does that through its toxin absorbing and faster oxygen production qualities. An added perk, the plant requires little maintenance and can bloom both in warmer and cooler climates.

This one is also like mother-in-law’s tongue. Its razor-sharp leaves can easily nick skin which terrifies the snakes. That is why gardeners advise you to plant it away from areas with frequent foot traffic, such as sidewalks and patios nearby lawn/garden or yard.

The discussion is incomplete if you talk about the ground cover that repels snakes and forget to mention onion & garlic plants. It’s a reliable technique that magically reduces snake population in the vicinity.

Onion and garlic contain sulphonic acid, the thing that compels us to shed tears. The same ingredient has a sharp odour that wreaks havoc upon a snake’s sense of smell. Resultantly, the creature gets confused and looks for a faster way out of the territory.

Garlic clove also emits an oily residue that causes itch to the serpent’s skin when it dares to slither over it.

Many people cultivate “Pink Agapanthus”, a flowering plant of the onion family, for ornamental purposes.

This plant is common in countries like Sri Lanka, India and Pakistan. Some of you might know it as Serpentina, Sarpagandha, Devil Pepper or Insanity Herb. The plant has a sharp aroma that snakes find intolerable. Therefore, they will not step foot near it.

If an adventurous snake somehow manages to bypass this plant and bites a person, rub its leaves on the puncture wounds. Its leaves act as an antidote against snake venom. The plant can also slow down the heartbeat and cause dizziness.

You may know it as “Wormwood”. Mugwort is basically a weed that spreads fast on the ground, like a wildfire. Many people aren’t sure what is it about this plant that drives the snakes away. Who cares? Since it successfully prevents the snakes from invading our houses, the rest is just detail.

Many believe that its wood-like roots are the thing that does the deed. They emit a pungent smell that bothers snakes.

Be mindful that it requires chemical weeding to keep it under control. Else, you will have to deal with weed and associated problems.

It is better that you are also aware of the type of ground cover and garden plants that snakes love.

Low lying shrubs or low vine trees act as canopies. Snakes can easily hide under them to protect themselves from predatory birds and unwelcoming weather. If you don’t want to get rid of these shrubs entirely, then regularly trim them. Make sure you leave at least a half-foot of space between vines and the ground.

A snake will have a field day if you have tall grass across your yard/garden. Snakes can camouflage in it and might attack your children or pet if they unknowingly startle them. Keeping grass trimmed leaves snakes vulnerable to both airborne and ground predators. Hence, they dare not cross a mowed lawn.

Flowerbed plants (morning glory, rosemary, jasmine etc.) are notorious for housing rodents. That is one reason snakes are attracted to such outdoors where there’s a thick growth of these flowerbed plants.

Another reason is that such plants offer snakes a cool and shady place to rest.

Snakes are fond of lazing around woodpiles, heavy mulch and stacks of debris. They serve as perfect hiding spots for them. Besides, they might also serve as homes to rats, mice and a bunch of other small animals that snakes like to hunt.

A neat and clean garden/yard looks attractive to us but unattractive to snakes and pests. You should keep that in mind and avoid cluttering up your yard or lawn.

A blooming garden or lawn can become a bane of your life as it looks hospitable to snakes. Therefore, you should be very picky when growing plants. We shared information on the ground covers that snakes detest and love to make it easier for you. Now you know which plants can both adorn your garden and also keep snakes away. If you embellish your lawn with the listed plants, it will not look like a paradise to snakes. They will be least tempted to cross it. Mission accomplished!

Clinton Newman is a blogger, who loves Hiking and Hunting Adventures. He's a passionate traveler. He made many hiking adventures in the past. He traveled Forests, Deserts, and Mountains. Now, he's guiding other Hiker to travel safely through this blog by reviewing top best picks gears for safety.