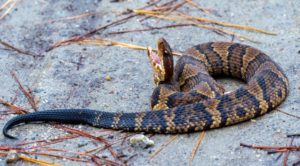 Cottonmouth snakes are among the aggressive members of the pit viper family; you know those rattlesnakes and desert vipers? Yes, their cousin. Indirectly saying, they can inject venom and negatively affect your system. That means hardly anyone will want one of these to hang around their property. Well, if you know how to get rid of a cottonmouth snake, you can keep your family safe from the threat of venomous bites.

Keep reading, and you will learn how to remove them from your place and prevent them from revisiting.

How to Get Rid of a Cottonmouth Snake

As I said, the removal of cottonmouth snakes is a two-stage process.

In the first stage, you have to deal with the snake: approaches for its removal from the property.

In the second step, you have to target the factors that bring these snakes to your doorstep.

You can rid a water moccasin off your territory through any of the given techniques.

Before you get handsy with a venomous cottonmouth, consider applying effective snake repellents.

You can apply factory-made snake repellent to compel them to evacuate the premises. Many store-bought repellents can kill snakes. So, pick a product that deters them, not kills them.

You can also make a snake repellent at home by mixing essential oils, such as clove oil, cinnamon oil, cedarwood oil and peppermint oil.

Repellents have strong odours that snakes cannot bear and decide to move out.

A variety of plants are famous for deterring snakes. You can consider planting lemongrass, marigold, mother-in-law’s tongue, garlic and onion in rows to drive snakes like blunt tail moccasins away. This method will also prevent snake episodes from taking place again.

Snake traps are your next best alternative if repellents fail. You just have to set a trap in the area the snake likes to hide or visit. The trap will do the rest.

It’s a dangerous approach because it requires you to get close and handsy with the snake. However, it’s also a very effective technique that will take the snake away from your place.

Attempt to remove a snake with a reliable snake hook or a pair of tongs only if you are trained and have protective clothing on.

Hiring a professional exterminator or wildlife removal service is the best of all the options. It’s both safe and effective. These experts have the proper equipment and can safely remove a snake from the vicinity.

Stage 2: How to Keep Cottonmouth Snakes Away from Your House

Now that you have removed the snake, move to the next stage: how to keep your house safe from future snake invasions.

Here, you have to target those factors that give cottonmouth snakes easy access to food and shelter.

Cottonmouth snakes are semi-aquatic creatures. So, they love to take a dip in the water now and then. Cover your poolside area and drains properly. Plus, keep the pond, drains and hose areas clean. Moreover, make sure the rainwater doesn’t pool anywhere on your property.

Cottonmouths or any species of snakes come to your place if it gives them easy access to food. A Water Moccasin has a diverse palate, it preys on any creature from fish to frogs to rodents to salamanders to birds to squirrels.

Control the food supply to keep the snakes away from your house. Clean up food spills, bird seeds, leftover pet food and other pest attractants to discourage snakes.

Snakes prefer to hide in attics, sheds, burrows, tall grass, dense bushes, weed, woodpiles, rockpiles and under mounds of debris and junk. Cottonmouths are no exception. Snakes are less likely to stick around if:

Cottonmouth snakes can get inside your building through broken windows, vents, drains, gaps in doors and vent ducts and cracks in the understructure. To ensure they don’t find a way inside your house, seal it. No, no I am not asking you to fortify your land like those emperors of Rome and Constantinople did.

You cannot erect massive walls around your property to protect it from snakes, but you can install snake-proof fencing. It’s an expensive method but will defend your property from enemies like snakes. Yes, cottonmouths also cannot crawl through snake fences.

A Cottonmouth snake, also known as a water moccasin, is a close relative of venomous rattlesnakes. That means it can inflict a venom-injecting bite if traumatised. Nobody wants his family or himself to go through such a trauma. You can take care of this problem in two steps: 1). Physically remove the snake through removal methods. 2). Target snake-attractant features that are drawing them to your house.