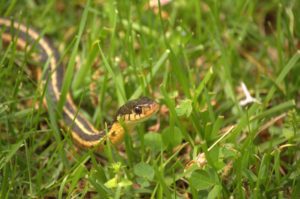 Having a garden snake hanging around means having fewer rodents and pests. However, the idea of hearing a hissing sound or walking on the same lawn where the reptile might be crawling too may not seem welcoming to many families. Therefore, you ought to know how to get rid of garden snake to take yourself out of such unwanted situations in a harmless way.

The creature is elusive and more coward than you. So, it will flee on the first sign of threat. It is less likely to return if you take practical measures to make your property uninviting for its entire clan. Some of those ways that successfully get rid of snakes are explained in the paras below. Head down to find out how to stop these invaders from entering your house without permission. So, bon voyage!

Ways to Get Rid of Garden Snake

If you have a garden snake around your property, you must try the following remedies to get rid of it. It will be gone for good if you eliminate the main attractants that were drawing it to your territory.

A garden snake, nicknamed a garter snake or grass snake, is a harmless reptile. So, don’t rush to take the big guns out when you see one crawling in your yard. Start with the most humane and easy scary method to make it leave the premises. Hold a garden hose to it. There’s a fat chance it won’t appreciate the water stream and scurry away.

Since it isn’t full of venom, you can also sweep it out of the premises with a broom.

Another least harsh method is to use a snake repellent to rid yourself of the trespasser. Many non-lethal and eco-friendly snake repellents are available online and on the market. Sprinkle one around your outdoors and other possible snake-favourite areas to force it out.

As a garden snake is usually small-to-medium sized, you can use a glue or minnow trap to seize it. Later, you can physically remove it from the vicinity by releasing it miles away from your house.

Note:  A garter snake releases a disgusting smell and oily musk when disturbed. So, put on protective gloves when handling one to prevent your hands from stinking.

The best and most effective technique to rid yourself of garden snakes and keep them away for good is to shut down their food supply. Slugs, earthworms, toads, frogs and rodents are their top favourite menu. Eliminate them from your premises to make the place unattractive for snakes. They will migrate out of fear of starvation.

Garter snakes or garden snakes have a strong affection for water sources and moist areas. They will travel to your place if it has a pond, lake, creek or pool nearby. You might find a snake sticking around your lawn if the grass and vegetation are moist. Eliminate standing water sources or pour repellents around them to prevent the reptile from resting there. Avoid over-watering your garden for the same reason.

Snakes like to take refuge in unkempt greenery, holes, burrows, under rocks, debris, mulch and firewood piles. You will get several steps closer to permanently ridding yourself of the snake problem if you make amendments to your landscape. Keep the greenery trimmed; remove piles of junk and other stuff from your property and eliminate their favourite shelters. Resultantly, snakes will not enter your place.

Snakes like to make dens in abandoned holes and animal burrows. Fill them up with dirt and gravel to not give these reptiles a chance to make a nest there.

Snakes prefer to hide in cracks and crevices in foundations, attics, storages, sheds, basements, ceilings and vents. Broken windows, pipelines, drainages and septic systems are also their favourite refuge centres. Mend the broken and damaged areas to eliminate their possible shelters. Also, seal the gaps under doors, windows and ventilation ducts to block their entry.

I have seen videos where people have used smoke to rid themselves of snake infestation. Many snake species, including garden/grass snakes, are sensitive to smoke and strong odours. So, you can use this weakness for your peace. Dig a sizeable firepit and keep the smoke alive for quite some time. The smoke and its stench will make them flee and never return.

Preventative measure like snake-proof fencing, made of net or mesh, is effective at blocking snakes’ entry. People also grow snake-repellent plants to build a boundary, sort of, to discourage snakes. These techniques have high success rates at keeping snakes at a safe distance from your property.

If you think the snake is posing a threat to you, your family and your beloved pets, hire a professional instead of tackling it yourself. He will remove the invader and also recommend ways to prevent future invasions.

You can also use pest control tactics to avoid making your abode a 24/7 buffet for these reptiles.

Despite being beneficial, a garden snake or a garter snake within the premises can make people uncomfortable. The creature is elusive and will flee the scene as soon as you make a move to scare it away. You don’t have to kill it when you have several humane ways to rid yourself of the trespasser. Luckily, the majority of those techniques I have already stated above. People who have applied these tactics saw a drastic decline in snake visits. You can also get the desired results if you start working without further delay.