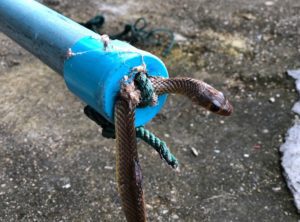 Glue traps and other types of traps aren’t the only effective and cheapest methods of getting rid of snakes. People are so creative that you will be amazed; they make traps from simple things like PVC and twigs. Don’t bombard me with the question ‘how to make a PVC snake trap’. I already sensed it coming.

I am sharing the easiest method to create a DIY PVC snake trap in the post below. This homemade trap helped me catch two fully grown-up gopher snakes past summer. Now, it is time for you to try it and rid yourself of the bothering snakes.

Go through your tool arsenal, and you will find all the equipment. See, no money is involved. So, let’s start, shall we?

How to Make a PVC Snake Trap

You can be creative and make a PVC snake trap at home for bothersome snakes. It takes little time and is almost free of cost.

You must gather the following equipment to create a DIY PVC snake trap.

Follow the below given simple steps to create a simple yet effective snake trap from PVC.

Take a large PVC pipe, probably blue, of approximately 3 feet. Ensure the diameter of the pipe is wide enough to fit a bulky python.

Next, you should drill a hole on one end of the pipe. The hole should be big enough that a thick rope-like thread can pass through it.

Make a cut near the other end of the pipe with the help of a sharp plastic cutter.

Afterwards, make another cut a little towards the drilled hole. Now, throw away the cut chunks of plastic.

Take two thick wooden sticks, approximately half feet long. Sharpen one side of each to make them look like nails.

Place the pipe near the opening of a snake-occupied hole or burrow. You can also place it on the ground from where the snake will likely crawl over.

Fix those wooden sticks, with pointed ends, on either side of the pipe so that it doesn’t move. The sticks should be buried a couple of inches in the ground to make them stand firmly.

Take another stick and place it on the pipe; both of its ends should touch the erect wooden nails. Use elastic bands to tie its ends to the wooden sticks. Now, the PVC pipe won’t move an inch from its place.

Take a long and flexible stick with one end sharpened. Put that flexible stick in that rectangular cut you made in the pipe earlier. The pointy end should meet the internal surface of the PVC.

Tie a sturdy and thick thread on the free end of that flexible piece of stick. Ensure the twig bends towards that other rectangular cut to make an arc.

Take a small plank and shape it like an oar. Tie its narrow end with the thread dangling from that bendable twig. Now, bend that wooden stick towards the cut and insert the flattened side of that oar-shaped plank into the cut space. Can you see the arc? Good. That means you have done it right.

Now, place the loop right at the opening of the pipe.

Cover the opposite end of the cylindrical pipe with a mesh fabric.

Place bait in the tube to lure the snake. I usually take a lizard or a rat and place it inside the pipe. Yeah, I know they cannot stay still – unless dead – and will escape in a flash. I am an evil genius, so that won’t happen. I tie a thread to the bait’s tail and loop the other end around a nail’s head. Finally, dig it into the ground.

Place 3-4 sticks on both sides of the nailed twigs. They should be equidistant from each other. Now, move a large leaf or a couple of flexible branches from them in a zigzag to form a fence. It will prevent the snake from going anywhere but directly into the tube.

Tada, your PVC snake trap is ready for the serpent moving around freely. Now, you just have to wait. Do your daily business and come back hours later to check the trap. There’s a strong chance that the troubling creature will be caught.

Instead of spending money on commercial traps, you can be creative and make one at home from PVC. Many people facing frequent snake invasions use PVC, a couple of wooden pieces, threads and elastic bands to create a homemade snake trap. It’s an effective method of getting rid of snakes without spending a dime. I broke down the entire process into simple and easy steps for you. So, try it to catch that sneaky snake who’s been bothering you for quite some time.