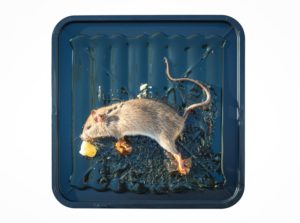 The name ‘snake glue trap’ doesn’t make the device rare or exceptional. It is pretty similar to any other rodent glue trap. So much so that you can make a trap for a snake from a common rat glue trap. You just need to know how to make a snake trap out of a rat glue trap.

Well, the process is super simple and easy. Instead of breadcrumbs or cheese, use snake-favourite bait and slide the trap into a covered box. You will know in a minute why I am stressing on a box with a lid. Now, you just need to find the perfect location for the trap.

Read the article below to learn how to make a snake trap from a rodent trap and the proper way to release a snake once it is stuck.

Rat glue traps are not much different from snake glue traps. Therefore, you can make a snake trap from a rat glue trap if an urgent need arises. You know, necessity is the mother of invention and all that.

You must perform the following steps to turn a rat trap into a trap for snakes.

Rodent problem is more prevalent than other nuisance creatures. So, you may have rat glue traps in your storage or some cabinet. Take it out of your repository. Else, you can simply purchase it from a nearby store if you don’t have one at home.

Most rat glue traps are like a book or a flat tray with an adhesive layer. If you place the trap just like that, non-target creatures like birds, squirrels, pets and insects might get stuck on it and harm themselves. So, you should slide the trap in a lidded box, probably a cardboard box. That would reduce the ratio of collateral damage.

Note: I have seen people placing a book-like glue trap at the base of a wall in an L shape. They don’t bother putting it in a box and shutting the lid. You can do the same in case a box isn’t available or finding one is too much work.

The sticky lining of these traps is often scent-free, which may work fine for mice and rats, but I am not confident about snakes. So, you need bait to make it a perfect lure for snakes.

By bait, I mean something that snakes cannot resist, not even if they try really very hard. Place a mouse, lizard, slug or fresh egg of a bird or hen at the center of the glue pad. You can also use small fish as bait, although I find it a bit torturous to leave a fish out of water.

If you have a problem with live bait, you can use scent-based bait to lure the snake instead. However, I should warn you that their success rate is lower than real bait.

Put the trap in areas where snakes are frequently seen or where you suspect snake residency. You can set a trap near vents, holes, cracks, behind storage boxes or appliances or at the base of a wall. You can also put it under a sink or near a broken drain. These are some of the favourite hideout spots of snakes. No matter which place you choose, it should be cool and dry.

Moreover, be a little creative when setting the trap; make it look like a part of the surrounding environment.

If you have placed the trap like a tray on the floor, cover it to protect the non-target creatures. The cover also protects its adhesive surface from dust. Besides, it also protects the trapped snake from over-exposure to the sun. Ugh, you don’t want to deal with a sun-fried snake.

How to Release a Snake From the Glue Trap

The snake is stuck on the glue trap. What should I do now? Take the trap to a place where the snake will have a chance of survival. Pour a few drops of cooking oil on the glued part of the snake. Let it settle for a few seconds. It will neutralise the adhesiveness and allow the snake to easily slide off the trap’s surface.

When the snake is free, discard the trap. If it’s reusable, carefully set it again for another snake.

Caution: Don’t forget to wear protective gloves and boots when you decide to release the snake on your own.

A rat glue trap is not much different from a snake trap. You can easily modify it into a serpent trap to catch the pesky snakes in the vicinity. The right bait and set-up location will make it into an inescapable prison for the annoying slithering creatures. A friendly piece of advice is to cover the trap or place it in a box to avoid dealing with other hassles. You can take help from cooking oil to release the creature. That’s about it. Yep, it was that easy.