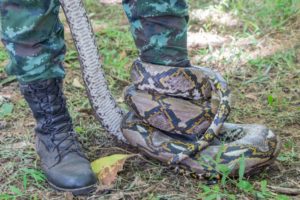 Most people have little tolerance for snakes. That’s why snake traps are a go-to option for removing them from the premises. Snake Guard Snake Traps are popular in this regard for a lot of reasons. Top most are its easy and versatile application and eco-friendly design.

To satisfy the curiosity about how the Snake Guard snake trap work, scroll a couple of lines down the given article. We have narrated a simple explanation to tell you how it works and what you should do to set the trapped creature free.

It’s a reliable choice to safely remove all types of snakes from small indoor areas, including crawl spaces. So, let’s learn its working and usage without further delay because you have a pesky snake to catch. Don’t you?

The self-explanatory name sums up the description in a few words. However, a complete movie is always more interesting than just a trailer. So, here it is.

A Snake Guard Snake Trap is a popular glue trap for snakes. It is a large glue board packed in a box. Yes, like that bigger Cahaba Snake Trap. The cardboard cover protects the immobilised snake and keeps the glue membrane dust-free.

The highlight of this product is that it is biodegradable. Therefore, neither will it pollute your environment nor harm the serpent.

How Does a Snake Guard Snake Trap Work?

A Snake Guard Snake Trap works like any other glue trap.

The trap features a pre-applied layer of wax-like glue to make the product ready to install for your convenience. The specially formulated glue has patented technology that impairs the snake’s movement without harming it. The super-sticky adhesive layer doesn’t allow the serpent to wriggle at all. Therefore, it will let you capture the snake alive unless you leave the poor creature trapped overnight.

The sticky surface is large enough to immobilise snakes of all sizes. No buddy, the list doesn’t include giants like an adult black mamba or king cobra.

You can move the trap to a remote but safe location when the snake gets imprisoned. When it’s time to set the snake free, just pour a handsome quantity of vegetable oil on the plastered area of the snake. The oil disables the stickiness, allowing the snake to slither away. After that, just dispose of the trap. Since it’s biodegradable, it will decompose naturally in a couple of days.

How to Use Snake Guard Snake Trap?

The best part of Snake Guard Snake Trap is its ultra-easy installation. No tools, no fuss – absolutely no inconvenience. The entire process takes a couple of seconds.

The trap is best for small areas, including crawl spaces and underneath porches or sinks. Besides, you can also place it in a basement, garage, animal barn, warehouse, shed, dog run or any other indoor place with a snake’s presence.

A Warning: Although the outermost layer of the trap has a water-repelling coat, keeping it in rain or moist area outdoors can still damage it.

The Snake Guard Snake Trap is one of those man-made blessings that help you get rid of unwelcome snakes. The glue box trap with a pre-applied sticky membrane can be installed in the desired place in less than a minute. It is biodegradable and thereby neither harms the environment nor the captured serpent. So, if someone wants to get rid of snakes from indoor spaces, Snake Guard is a safe, effective and humane option.