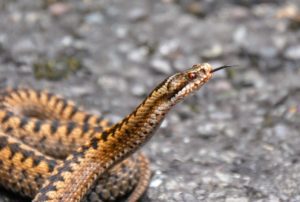 How to tell if the snake you just encountered was poisonous or non-poisonous?

The question appears tricky, especially to an untrained person, like the one about chicken and egg: which one of the two came first?

A rattlesnake or a Coral snake is easy to identify since the rattling sound of the former and the brightly coloured skin of the latter are dead giveaways.

But would be you be able to distinguish between a semi-aquatic Cottonmouth – a venomous pit viper – and a harmless water snake as easily? Probably not.

There are some tips and rules that can help you tell a venomous snake apart from the non-venomous.

So, if you encounter a snake, these guidelines will help you answer the question: Is it a venomous snake?

Difference Between Poisonous and Venomous

When you ask whether a snake is poisonous or not, you actually mean to say either it’s a venomous snake or a non-venomous one.

According to the Indiana Department of Natural Resources Division of Fish and Wildlife, the phrase “poisonous snake” is technically incorrect.

Poisonous means the toxins will be unloaded in the body when you eat the organism. For instance, a garter snake is poisonous to eat because it feeds on newts and salamanders and stores their toxins.

Alternatively, venomous means the organism bites or stings to transfer its venom. Very few snakes are poisonous; the dangerous ones are mostly venomous snakes.

How to Tell and Identify if a Snake is Venomous

To identify a venomous snake with 100% certainty is as difficult as telling apart the gender of an ant just by looking at it.

However, there are three to four tips that can help you accurately identify a venomous snake.

These distinguishing qualities have been determined after observing the most common dangerous snakes found in the U.S.A. These include a Rattlesnake, a Copperhead, a Cottonmouth (also known as Water Moccasin) and Coral Snake.

Following are the features that you need to watch out for to separate a dangerous snake from a harmless one.

Venomous snakes usually have broad, triangular heads with skinny necks, while the non-venomous ones have a more rounded head. This difference in shape occurs because of the venom-containing sack.

A venomous snake has a beefy, triangular head because it carries a venom sack underneath its jaw.

However, some non-venomous ones, like a viperine snake, also flatten their heads to appear threatening. That means you need more than just a triangular head to dodge a dangerous snake.

Pit Vipers have pits on their heads or snouts. These pits help them sense prey through Infrared Radiations. Since you cannot observe these sensing holes from a safe distance, it is better to let the curiosity be; call a wildlife professional to deal with the creature.

Venomous snakes have catlike eyes with elliptical and slitted pupils, while the harmless ones have rounded teddy bear eyes. Again, you’ll have to get too close to observe this feature, which is dangerous.

It’s a general observation that the majority of harmless snakes have solid coloured skin. The more coloured and patterned a snake is, the more you should mind your own business and let it be.

However, there are exceptions. For instance, a Black Mamba is extremely venomous; yet, it is blackish. Another exception is a non-venomous scarlet king snake that resembles the dangerous coral snake in colour and pattern.

Behaviour can also help you tell whether a snake belongs to the category of dangerous ones or harmless ones. For instance, you can distinguish between a venomous Cottonmouth and a non-venomous water snake by their swimming method.

Non-poisonous snakes fully submerge in the water, leaving only their head above the surface, while the venomous ones will float along the water.

Beware, a Cottonmouth can deceive you. It can float on the water while keeping its head erect.

Similarly, knowledge about a snake’s habitat or its preferred nesting place is also a reliable indicator.

For example, Cottonmouths like to dwell in water or near it. You might come across the reptile in swampy areas or near a pond. Similarly, in some geographical territories, Copperheads are found in wetlands close to forests and rivers.

The above rules will help you identify the threatening type in 90% of the cases. But, Coral Snake is a rule-breaker. It doesn’t have a triangular head, catlike slitted eyes and sensing pits.

The only rule it follows is that of coloured and patterned skin. You can separate a coral snake from copycats, like a scarlet king and milk snakes, through the pattern of colour and nose.

In coral snakes, larger red and black bands are divided by a thin yellow band, whereas red is followed by black in scarlet kings. Next hint, a black nose = a coral snake.

How to Treat a Snakebite?

If you get bitten by one of the above venomous snakes, seek medical attention, Immediately.

Delay will give venom time to either spread throughout your bloodstream, crash your respiratory muscles, or degenerate tissues in a few hours. Mayo Clinic suggests some emergency tips that one should remember to treat a snakebite.

These are some of the most reliable ways to identify a venomous snake. However, we wouldn’t recommend you to get close to the reptile to confirm whether it really is one of the dangerous ones or not. After all, curiosity killed the cat. If you ever encounter a snake, keep a safe distance and call wildlife experts to remove it from the area. If you do get bitten by a snake, get medical attention without a second’s delay.