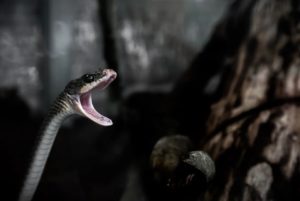 If you spend time outdoors, maintain a garden, or work on a brush pile, the chances of encountering a snake are quite high.

Well, the good news about having snakes around your yard is that they are usually harmless and actually quite beneficial as well.

As you might know that they are of importance and help control rodents. They even add beauty and interest to your garden.

As a matter of fact, snakes invoke a sense of fear in a lot of people, which usually comes from a lack of knowledge about which are venomous and which are not.

Homeowners are often concerned about snakes whether it’s a venomous or nonvenomous snake.

Nonvenomous snakes are considered harmless, although sometimes they might put on defensive postures, or even try to rattle their tail in leaves.

Don’t worry too much if you notice similar behavior because most of the time they are just making an effort to keep you away from killing them.

So don’t be confused by their actions and interpret them as hostility, just keep in your mind that they’re just trying to defend themselves.

What scares Snakes and What are snakes afraid of?

Snakes are scared of humans as they know that they can get hunted for various reasons.  In different parts of the world, different breeds of snakes are captured and shipped to other countries to be sold.

Whereas venomous snakes are also widely used for making anti-venom, made from their venom and is primarily used to save the life of a snakebite victim.

Snakeskin also has multiple uses, they are used in making purses, shoes, and belts.  And, snakes even get killed by people out of fear.

Among many, the biggest threat to the snake kingdom is the destruction of their habitats by humans.  Their homes are being widely destroyed to make room for farms, ranches, and highways.

Snakes have several ways of protecting themselves. Their skin coloring alone is great camouflage and some snakes can make a tunnel down under sand or leaves for extra coverage.

Some puff, huff, and hiss loudly or shake their tail to scare off a predator while some are habitual of hanging their tongue out and play dead. As far as venomous snakes are concerned, they will try to escape a hunter before ever trying to bite them.

How to keep snakes away from invading your yard?

Get rid of snake food supplies

Snakes are commonly found in areas where rodents are mostly found as this is one of their primary source of food. As a matter of fact, snakes are also known to eat birds, frogs, voles, insects, moles, and even some eat fish too.

So if you have an issue with any of these animals, it would be better to get rid of that pest problem first. Once you manage to eliminate the source of food, snakes will automatically move on in search of another source of food in a different area.

Snakes are not comfortable in the presence of Foxes and raccoons. Turkeys, Guinea hens, pigs, and cats are also proven to be quite helpful in keeping snakes away.

If foxes are not easily available in your area, The urine of the fox is a very good natural repellent for snakes when spread properly around your garden, yard, or property.

Make sure there are no hiding places

Snakes are normally comfortable to hide in dark, damp places and are also known to live and hide in crevices, cracks, and holes. So if you eliminate these hiding places, this will help to deter snakes from taking up residence on your property.

Start with carefully closely observing the exterior of your home or your property and repair if there are any cracks or holes. Also, repair any damaged piping, gutters, and ventilation ducts. It would be better to replace or repair any damaged screens on windows and doors as well.

Change the landscape of your yard or Garden

If your garden or yard is prone to snakes, it would be better to start making changes that will discourage these pests from sneaking in.

Consider garden regularly in order to remove any snake attractants like holes, debris, and overgrowth. Make sure that the grass is cut short so that snakes are left with a shortage of places to hide.

Nowadays, many smart people prefer to install snake-proof fencing made of steel mesh or plastic sheeting.

So If you plan to install fencing, It is very important to make sure that it is flush with the ground and properly angled outward with at least 3 feet high and 4 feet deep.

If you think installing a snake-proof fence is not an economical option, you can make use of materials that make it a bit more difficult for snakes to smoothly slide over like pine cones, holly leaves, eggshells, and gravel. Another effective way could be planting snake-repellent plants that work as a natural deterrent.