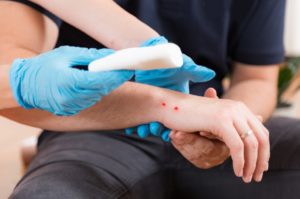 As the snow starts melting, the number of appearances of snakes increases.

That means you could come face to face with one too.

What if that’s a Copperhead, and it manages to bite you?

You will end up in ER, most probably, but you will not be in a life-threatening situation.

However, that doesn’t mean it’s not a big deal.

There are certain things that are allowed and forbidden regarding the treatment of a venomous snakebite, or snakebite in general, that can help you keep the situation under control until the help arrives. They are discussed below.

What is a Copperhead?

A Copperhead is one of the species of venomous snakes of the Pit Viper category. Although dangerous, its bite is rarely fatal for humans because its venom is mild as compared to other Pit Vipers – rattlesnakes, Cottonmouths and Coral Snakes.

The snake gets its name from copper-red head and tan to copper grey stripes all across its body. This species is most common in the southern and eastern parts of the United States.

What to Do If Bitten by a Copperhead?

Although the venom of a Copperhead isn’t potent and deadly, it still has grave repercussions if left unattended. Its venom is hemolytic, capable of rupturing blood cells.

So, if you or someone gets bitten by a Copperhead, contact 911 or your local poison control department immediately – every second counts, people!

Look for the symptoms that are dead giveaways of venomous snakebites to be absolutely sure. Intense burning sensation in the wounded area in the next 15 – 30 minutes; nausea; labored breathing; dizziness; sweating; swelling and bruising around the injured part – it can spread to the entire limb.

Meanwhile, there are certain things that you should and shouldn’t do in the case of a snakebite.

What You Shouldn’t Do

Before you start with the things that you’re supposed to do when suffering from a bite of a Copperhead, it is imperative to know about the actions you shouldn’t do.  These are:

What You Should Do

The best practices that are acceptable if bitten by a snake are:

What to Do to Avoid Snakebites

It is better to be safe than sorry. You could do several things to avoid the not-so-pleasant experience of a snakebite altogether.

Wildlife experts say that snakes are not a fan of humans. They like to stay at a distance from you and only strike when threatened, like when you step on it or step too close for its comfort. So, look where you’re stepping.

Wear thick pants and long boots to cover as much of yourself as possible. It’s better to armour yourself in snakeproof gear, like snakeproof gloves, chaps and snake proof boots etc.

Hold a walking stick and tap it on the ground while walking. So, if a snake is lurking nearby, it will more than likely attack the stick. Thus, giving you a window to run away from there.

Carry a flashlight if you’re out at night so that you can see the path and avoid surprise encounters.

A copperhead is a venomous snake, but its venom is the least potent and deadly. Thus, you won’t be in immediate danger if bitten by it. However, it is imperative to reach a hospital quickly so that you can have an anti-venom drug in your system at the earliest to prevent tissue damage. What you can do in the meantime is follow Do’s and Do Not’s recommended by the medical experts to the dot to keep the situation from getting out of hand. Or else, take precautions to avoid the painful experience altogether.