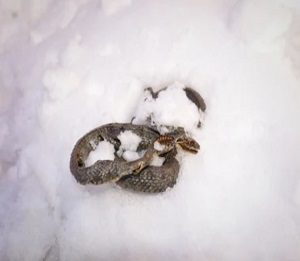 No matter how fearful you are of snakes, sometimes you might wonder about them. We all do! And if you are spending time out on a long summer night, chances are you have seen a creeping snake in the woods or maybe in your home backyard. But the question is why in summers only, and where do snakes go in winters?

There are several kinds of snakes in each part of this world. However, most of them agree to come out in warm weather. That is curious!

However, this is something that has a proper logical answer. To be honest, snakes and reptiles are mostly more seen in summers as compared to the extreme chilly or snowy temperatures. And that cannot be just randomly. Given that, we shall figure that out.

Where Do Snakes Go In the Winters

Snakes are ectotherms like many other creatures. During the winter seasons, snakes go into the state of brumation in which they are not more active and have a sluggish metabolism.

Temperature ranges that are more into the minus and chilly side do not go well for their body temperature and that causes them to take a leave for the winter season for this very reason. Mainly, the body temperature of the snake greatly relies on the external environment and for that, they tend to remain hidden throughout winters, or most of its part.

Talking about the body temperature, snakes are cold-blooded creatures in nature and that makes them unable to maintain their temperature as many other animals or reptiles would do. That is the reason why you see this creature in the search of a shelter as soon as winter is around the corner. To keep them safe from the extreme chilled temperature, mostly snakes go into caves, tight spaced pits, under logs, holes, rocks, and other similar places that a forest has commonly.

As a matter of fact, a snake would go into any place that is fit for their nature and this also includes your car engines, be watchful! One of the pretty obvious reasons why many people fear them is their stealth nature and the way they creep that go unnoticed.

So, when the cold wintry season ends, or near to its ending span, the snakes inside those holes and pits surely get the impact and feel the warmth of the weather. Therefore, their coming out of those areas becomes the next obvious parameter that you should be aware of if you have larger land with holes of wood logs on it.

Do snakes experience Hibernation during the winter season?

For animals and reptiles, external environments matter the most to adapt themselves accordingly. Hibernation for snakes is the ability for them to endure the winter weather without much concern about hunting their prey. As you read above, snakes mostly find themselves comfortable in the summer season so when they go into hibernation it readily keeps them vulnerable to the winter.

So the hibernation period makes the body temperature of the snake lower than usual hence the need for less oxygen. It impacts their mobility. Hibernation of warm-blooded animals means ether are more engaged in deep sleep in the winter.

Why do snakes go in brumation period?

Don’t confuse yourself with hibernation and brumation of snakes as both are pretty similar terminologies. In brumation, the metabolism of the snake becomes less active. Brumation of snakes and warm-blooded animals means ether are more engaged in sleep in the winter season. On the other hand, brumation is totally adverse to hibernation. In brumation, cold-blooded animals go into a deep sleep.

Although we have explained both of the similar-looking terms, snakes do not hibernate. The reason is pretty simple. It is because hibernation is for warm-blooded animals and reptiles whereas snakes are cold-blooded creatures.

Typically temperature is the most highlighted parameter that affects living beings including animals and reptiles. Although you can see a snake in winters too, that would be either a rare case or maybe because the snake has some important job to do; who knows!

However, in this article, we only focused on the majority of the snakes’ nature and where they go in the winter season. We hope this post has been insightful for your query and that you have learned something new today!