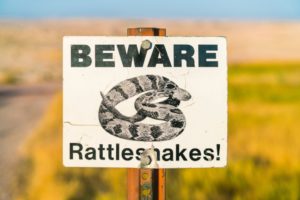 When months of spring and summer approach, most of us want to hit the wilderness or visit a trailer park to enjoy the blue skies and blooming flora.

Unfortunately, it is also a high season for rattlesnakes.

There’s no need to cancel your plans because of the fear of a might-be” encounter with a rattlesnake.

Here are some tips that will help you both have a good time without crossing paths with each other.

How Would I Know If It’s a Rattlesnake?

It might be a bit challenging for an ordinary hiker to identify a rattlesnake at first glance. However, certain signs can help you recognize it correctly, not to mention before it’s too late.

A rattlesnake has a beefy and scaly body with a triangular-shaped flattened head and a rattle at the end of its tail.

The catlike elongated eyes with slitted pupils and heat-sensing pits around the head and nostrils are also indicators of it being a pit viper, but that means you’re probably standing really close to notice them.

The biggest giveaway is the rattling sound that, again, warns you that you’ve entered the danger zone – the snake is somewhere nearby – and need to retract your steps.

How to Avoid Encounters with Rattlesnakes While Hiking

Like the majority of the snake species, rattlesnakes prefer a specific climate and habitat; believe it or not, but that environment doesn’t involve lingering around humans. Following are some tips that will help you steer clear of rattlesnakes while hiking.

The majority of rattlesnakes prefer hot and desert climates except for the Eastern Diamondback. It likes a moist environment. So, basically, rattlesnakes are mostly spotted during summers.

To regulate their body temperature, they look for shady spots, such as under a tree log, rock, woodpile or shrubs, to warm up. A rattlesnake is most active when the sun starts going down and during the early hours of the morning.

Be careful when hiking during these hours.

Always choose wide and crowded trails when hiking during snake seasons because rattlesnakes are very anti-social and prefer to stay away from tracks with heavy foot traffic.

Don’t let curiosity get the better of you. Don’t poke around in places like holes, shrubs, under logs, ledges or rocks. These are favourite sheltering spots of the rattlers, and your curious search might agitate one resting there.

Also, avoid sitting on a tree stump or log without probing them first. It is better to keep a long staff or hiking pole in hand so that you can tap on bushes, undergrowth, rocks or on the ground to alert the snake of your approach, giving it a chance to skitter away.

Do not hike alone. If you’re hiking with kids, strictly forbid them from wandering off alone. Try to stay on clearer and open parts of a trail. As a result, not only you’ll be able to watch your steps but also spot a snake from a safe distance.

It is plain foolhardiness to walk barefoot or in open-toed sandals on trails. Always wear high-top hiking boots along with long and loose denim pants to shield from unanticipated snakebites.

Don’t try to remove the snake with a stick or get closer to capture a shot. Remember, an agitated rattlesnake is a dangerous foe. When you hear a rattling sound, take the warning very, very seriously.

If you really can’t resist taking a picture, do that from at least a 10-steps distance.

What to Do If You Come Across a Rattlesnake?

When hiking in snake season, there’s a high chance that you might encounter a wandering rattlesnake. Oh, oh, now what?

Halt immediately. A rattlesnake can sense the vibration of feet, so it will probably produce a rattling sound to warn you instead of revealing itself. Locate the origin of sound and move accordingly to distance yourself from that spot.

Don’t make any sudden moves. It will threaten the snake and provoke it to strike.

What to Do If You Get Bitten?

According to the U.S. Dept of wildlife and Ecology, hardly 1 in 37,500 people get bitten by a venomous snake – the death rate is even lesser, 1 in 50 million.

If you do become that unfortunate one, follow the listed guidelines:

Although venomous, a rattlesnake isn’t out to harm you, especially if left alone. Be smart while choosing a trail, behave and gear appropriately and stay away from a rattlesnake’s way to make sure your hiking trip doesn’t get ruined. Educate yourself on how to treat a snakebite to avoid worsening an already unpleasant situation.