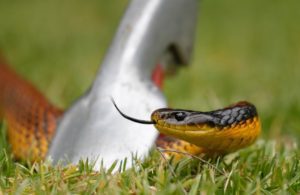 Seeing a snake wriggling and dancing in one’s yard isn’t an amusing sight.

Either scream bloody murder or attempt to kill it.

The majority of us would go for one of the two courses of action.

I know the presence of a snake in the yard invokes your survival instincts, but there are less violent ways available to deal with the situation.

Snakes hate our faces as much as most of us humans hate theirs.

So, you need to know how to react when you see one in your backyard to make sure you don’t aggravate the situation.

Read below to find out what experts advise you should do under the circumstances.

What To Do If You See A Snake In Your Yard?

Don’t Panic: Help! Help! There’s a snake in my backyard! Screaming bloody murder is the last thing you should do upon sighting a snake.

Panic will make you act recklessly and also provoke the culprit. It seems easier said than done, but you need to know that snakes want to avoid human encounters more than humans do.

The likelihood of the snake be on its merry way is far greater than it attacking you if left undisturbed.

Do Not Attempt to Harm or Kill It: Snakes, poisonous or non-poisonous, have as much a right to live as any human being or other living creatures.

Most snake bites occur when people dare go near the creature to kill it or to force it to leave its designation.

Striking a human is the last resort for a snake; its immediate response is to maintain distance between the human and itself. However, your attempt to inflict harm or end its life provokes it. That’s when you call upon its wrath.

If it’s a venomous snake, then avoidance might not be the smartest step as its presence endangers the life of your near and dear ones, including pets.

Killing it is still not advisable. You can use benign methods, such as use a snake trapper to extricate it from the perimeter or a call upon wildlife, local fire department or exterminator company, to relocate it for you.

Just make sure you release it in a favourable habitat so that it can survive.

Note: Transporting a snake requires extra caution, especially if it’s a large venomous kind. If you aren’t an expert in handling snakes, or if the reptile invokes fear in you, then don’t try to do it.

Instead, curtail its freedom and wait for the professional to come and tackle it.

Never under any circumstances pick a venomous snake to transport it. Always use a gardening tool or a snake tong or hook to direct it into a box/container with a lid.

How to Limit the Existence of Snakes in Your Yard?

If you want to ensure snakes don’t visit your yard, there are several eco-friendly and non-brutal ways to prevent their entry. Some of them are:

Non-Lethal Repellents: There are non-toxic snake repellents available in the market that will bar snakes from entering your property, keeping both outdoors and indoors snake-free.

If you don’t want to spend money on those, you can use essential oils (cinnamon, clove and cedarwood oils) and natural products (vinegar, ammonia, garlic and onion) – they all possess an extremely pungent odour – to compel the snakes to run away.

Moreover, many people plant snake repellent plants in their yards and lawns to keep these critters at bay.

Snake Fencing: I believe in nipping the evil in the bud. In other words, if there’s no opening, how will a snake step its non-existing feet in your yard in the first place?

There’s a thing called “snakeproof fences.” Install those all around the perimeter to erect a barrier between these unwanted guests and your property.

Erase its Favourite Spots: Seal all the cracks and openings around the building; mend broken pipes and gutters to make sure there’s no hiding spot for a snake.

Cover all the openings except for one – that you believe is a snake’s entry point. Set a trap or a bait on that main entrance to imprison the disturber. Once it is trapped, release it near wooded territory so that both of you can live in peace.

Also, keep the grass short and regularly trim shrubs and trees. Snakes love to hide in this forest-like dense greenery. Change the landscape and keep it clean to take that temptation away from snakes.

Food Supply Management: Creatures like rodents, frogs, insects, voles and moles are the favourite dishes of snakes. Eliminate their existence from your backyard to ensure snakes don’t have any temptation to keep visiting your land.

Appropriate knowledge can get you out of nearly any crisis. Similarly, a little caution can save you from a hell of a lot of trouble and pain. A snake in one’s yard might be a startling – frightening even – sight for many, but an appropriate response and action can diffuse the situation before it turns into a full-blown crisis. We stated some practical solutions that can significantly cut down snakes’ access to your proximity so that you don’t have to face these encounters at all.