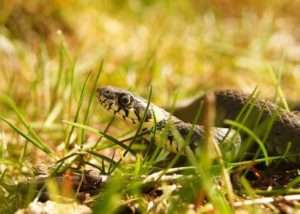 Snakes, however fearsome they might appear, aren’t invincible. Humans kill them whenever they get a chance. Wildlife biologists strongly advise otherwise because snakes are important for the ecosystem. The use of chemical repellents can effectively scurry the serpents away. But, it is also a known fact that many of these have side effects.

Animals that Keep Snakes Away

Snakes are petrifying. But, some animals aren’t afraid of these serpents. They can easily overcome the slithering beasts. Moreover, even a couple of birds also have snake-catching/killing abilities.

Mongoose is a remarkable snake killer, catcher. Call it whatever you want. It has an inborn passion for killing snakes. People living in Africa, Asia and Europe are at an advantage as they can easily own and domesticate a mongoose.

This weasel-like animal has acetylcholine receptors that make it immune to snake venom. Add their thick fur to the equation and you get why they are known as formidable fighters against deadly serpents. Another plus is that this animal also has a strong affinity for pests like rodents, worms, lizards and insects.

However, due to its non-selective diet, it can cause serious damage to the ecosystem in countries where it isn’t native.

Another formidable opponent of snakes is a honey badger, a mammal also known as ratel. This carnivore is inherently immune to cobra venom—that explains why it can take a giant snake head-on. It can crush a snake’s head with its powerful jaws. The mammal has thick skin which makes it a challenge for a snake to penetrate its fang into.

A weird fact about this animal is that it also digs up human corpses and feeds on the remains. Ewww!

Unfortunately, Mongoose and honey badgers aren’t native to North America. Don’t worry, though. Wildlife experts have a whole list of other natural predators that can help you chase the snakes away.

These cutie pies can patrol the property to keep the invaders away. Cats and dogs aren’t natural snake killers like mongoose and honey badgers. But, they can tackle a non-poisonous snake occasionally. However, you don’t want to pit these poor pets against a deadly viper. Nay, they don’t stand a chance against that monster. Yet, zoologists have quoted instances where cats chased away the deadly black mambas.

The Scottish terrier is a dog breed trained to hunt snakes and rodents. Again, the animal isn’t immune to snake venom.

Foxes and raccoons are known as common snake predators. Having these animals patrolling your property is an effective way to keep snakes at bay. If foxes are native to your region, fox urine can be an effective snake repellent. Else, you can use store-bought fox urine to sprinkle around the property to repel snakes.

Another natural predator of snakes, poisonous and non-poisonous both, is the hedgehog. Yeah, that docile and cute little thing with spikes. It can easily tackle a deadly snake. The needles on the body of a hedgehog make biting this creature extremely unpleasant. So, when the snake strikes the hedgehog, it gets a mouthful of needle-like spikes. Ouch!

Also, a hedgehog has inherent resistance to venom which helps it survive a snake attack. But, you should know that it isn’t immune to snake venom like the mongoose.

Domesticated fowl don’t appreciate the sight of a snake in their territory. Don’t underestimate the power of chickens. They instinctively hunt small and eager serpents. Why wouldn’t they? Snakes feed on their eggs whenever they get a chance.

Roosters in particular hunt snakes that could threaten hens and eggs.

If you want something more intimidating and specialized in snake killing, bring in a turkey or guinea fowl to the fight. Both are adept at murdering small snakes.

Some birds are also a huge fan of snake meat, like an owl or a hawk. They crush the snake with their monstrous talons or drop it from a high altitude to end its life. Now you can understand why snakes are wary of such birds. It is because of the same reason that snakes avoid slithering across a mowed lawn. Yeah, because they can be easily spotted by these predatory birds in cut grass.

Many a time, people use owl statues in their yards to scare off snakes and rodents. Whether this tactic effectively fools the creatures is debatable.

Wild animals like a bobcat or a wolverine are also known to effectively tackle a venomous snake. Both have thick furs and agile reflexes, making them formidable opponents. Even a timid armadillo, a nocturnal insectivorous mammal, can beat a snake. The animal uses its armour or gigantic claws to cut down the snake, however rare that might be.

Some species of snakes themselves are the biggest enemies of other serpents. The primary food of the king snake, the most feared cannibal snake, is small snakes. Although it’s non-venomous, it can easily take down a rattlesnake.

Cobras are another cannibalistic species of snakes that use other snakes for their dinner.

As you can see, using snake repellents or killing aren’t the only ways to deal with the serpents. Animals and birds can also keep these unwanted invaders at bay. Many of the animals listed above are best to be left only in the wild. We would suggest you remove things that snakes like from your property. By doing that, you won’t even have to think about animals or any other measures to stop snakes from showing at your doorsteps.

Clinton Newman is a blogger, who loves Hiking and Hunting Adventures. He's a passionate traveler. He made many hiking adventures in the past. He traveled Forests, Deserts, and Mountains. Now, he's guiding other Hiker to travel safely through this blog by reviewing top best picks gears for safety.